Spring break 2017, I traveled to Cuba to experience the culture including art, food, music and dance. The 10 students ranged in age from 14 to 18 and were not a part of the same performing ensemble but were all music students with an interest in travel. Although we were primarily listeners, I did bring a cornet so I could play during downtime and interact with the cuban musicians I met which were many. There was live music at nearly every meal and I got the chance to play every day. 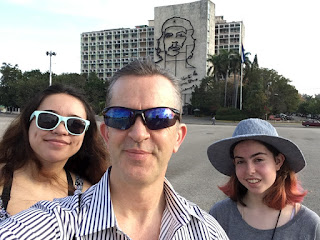 Here's a slide show of many of the events including photos taken by me:

Here is a list of some of the interesting Cultural Social Projects we visited.  Many of these are supported by the Cuban Ministry of Culture.

Canon Ceremony - recreation of 400 year old tradition when canons announced the closing of the walls of Havana warning inhabitants to stay inside their homes -
https://www.tripadvisor.com/ShowUserReviews-g147271-d149139-r288570663-Castillo_de_San_Carlos_de_la_Cabana-Havana_Ciudad_de_la_Habana_Province_Cuba.html

Posted by Jake Bergevin at 6:03 PM No comments: